We know the winners of Eko Gwiazda 2019/Jawor edition!

On 12 April, the final of the contest Eko Gwiazda 2019/Jawor edition took place at the Regional Museum in Jawor. The winners and the finalists of the competition were awarded during the ceremony. The event was attended by school principals, teachers, students, representatives of districts and local authorities as well as Mercedes-Benz Manufacturing Poland, the promoter and sponsor of the competition.

The winners of the second Jawor edition of the Eko Gwiazda competition were students from Zespół Szkół Technicznych i Ogólnokształcących in Legnica: Karolina Maślej and Damian Mejor, who under the supervision of Mrs. Grażyna Maciak, prepared a film entitled „Breath of the future”.

It was worth fighting for the first place! The main prize – a weekend trip to the Mercedes-Benz Museum in Stuttgart – was presented to the winners by Stanisław Laskowski, Vice Mayor of the Jawor District, Andreas Schenkel PhD, CEO Mercedes-Benz Manufacturing Poland and Marta Kunecka from HR Department. The other finalists, 5 teams, received diplomas and bluetooth  headphones. In addition, special containers for collecting used batteries were prepared for all the schools awarded in the competition.

Eko Gwiazda is an ecological contest for secondary school students from the following regions: Jawor, Legnica, Świdnica and Wałbrzych, which aims to promote pro-ecological attitudes and behaviours among young people. This year’s task was to make a short film about how to improve air quality in the region.
Honorary Patronage was taken over by District Mayor of Jawor, Mrs. Aneta Kucharzyk.
More information about the competition and finalists: www.jawor.ekogwiazda.pl

The students of the “Florist” profile from Zespół Szkół in Jawor under the supervision of the Director Mrs. Dorota Subocz helped in the preparation for the event. They created beautiful decorations – green walls made of natural materials. It was very EKO! 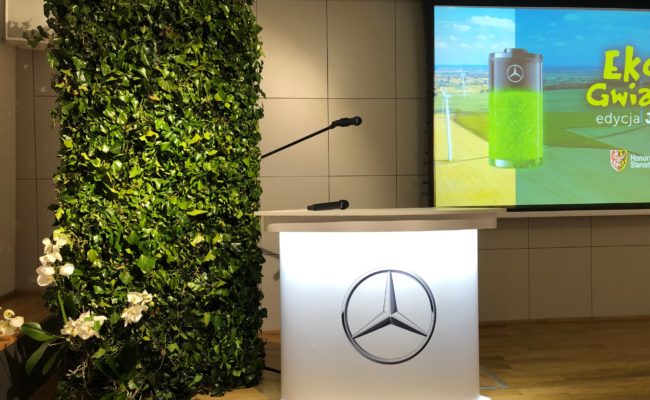